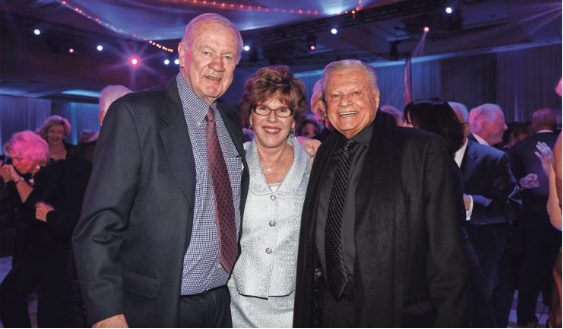 When Jan Salta and Suzy Leprino agreed to co-chair Eisenhower Medical Center’s 45th Anniversary Gala, they both immediately agreed on one stipulation: “It had to be a simple, elegant evening to remember.” Dubbed “Dancing Through the Decades,” their vision was certainly accomplished with many attendees looking forward to the hospital’s 50th anniversary celebration.

Michael Landes, Eisenhower’s Foundation President, served as the evening’s delightfully energetic emcee. He revealed the event had drawn a record crowd of 850, and had set another record by raising two million dollars for the foundation’s purchase of the cutting-edge, minimally invasive Da Vinci XI surgical system which was on display during the cocktail reception.

Landes invited Board Certified Colorectal Surgeon Dr. Scott Gering to the stage, who gave a moving tribute to everyone who contributed; “This equipment lets me reach cancers in places I couldn’t get to before” he said, “it has turned me from a regular surgeon into a super surgeon, doing more for my patients than I ever dreamed possible. And it’s the equipment – not me – that has made this dream come true. I thank you from the bottom of my heart.”

Landes thanked Nancy Harris of The Coeta and Donald Barker Foundation for calling a special board meeting to authorize a last-minute $150,000 donation that brought the event’s fundraising total up to an astounding $2 million.

G. Aubrey Serfling, Eisenhower’s President and Chief Executive Officer, thanked Landes for his enthusiasm and dedication to this event. He quipped, “Michael doesn’t get excited very often, but he was grinning every minute he worked on this event.”

Serfling also teased Eisenhower board member Harold Matzner saying, “As chairman of the film festival, Harold had 2,700 people at his gala last week, and so he’s not very impressed by our 850.”

Joking aside, Serfling spoke emotionally of the medical center’s amazing history of philanthropic support and the donors who come forward, time after time, year after year. He also announced proudly that Eisenhower was recently named one of the Top 50 cardiovascular hospitals in the country.

Instead of booking a professional singer to open the program, it was decided to create an opportunity for talented, young and local performers by offering a $4,500 scholarship. After auditions by 24 hopefuls on the stage of the McCallum Theatre, Hagar emerged the winner.

A second video titled, “A Legacy of Philanthropy” told the Eisenhower story through inspiring comments from major supporters and leaders beginning with historical footage of Ike & Mamie Eisenhower and Bob and Dolores Hope. The video continued with comments from Greg Renker, Harry Goldstein, Sally Berger, Dr. Adrian Graff-Radford, Martin Massiello, Ann Mostofi, Suzy Leprino and Helene Galen, who pointed out “being a teaching hospital proves we’re the best; so there’s no reason for anyone to ever go anywhere else.”

Dinner was a wonderful combination of a marinated beef filet, herb-crusted salmon, vegetables and cauliflower mash served on an elegant four-section plate.

The stylish, sophisticated décor featured centerpieces of clear, 3-foot vases filled top to bottom with white calla lilies. The seating was brilliantly designed, with three tiers of tables on three sides surrounding the dance floor, which gave every seat a clear view of both the stage and the four video screens.

All guests were given a beautifully bound, historic event program, suitable for the local history shelf of your home library.

And Then There Was Diana …

As guests were finishing their dinner, with the Impulse group still entertaining on stage, there was a minute musical interlude followed by off-stage singing and suddenly — without any introduction of any kind, Diana Ross strode on stage singing, “I’m Coming Out,” followed by a non-stop, 20-minute medley of her most famous hits.

Ross’s green sequined tulle coat and emerald sequined dress were as glitzy as her famous over-sized hair. The rumor about a “surprise guest star” had exploded into the real thing. DISBELIEF! PANDEMONIUM! AMAZEMENT!

Instantly 850 forks were dropped and 1700 feet began tapping as the room came alive.

I was chatting with my seatmate, Joan Mishek, wife of Hazelden Betty Ford President and CEO Mark G. Mishek. Suddenly, mid-sentence, she sprang to her feet, hips swaying, shouting to her husband, “I have to dance!”

He nodded his understanding, and quickly followed her to the pulsating dance floor where suddenly everyone had to dance. The huge J. W. Marriott Resort’s dance floor was filled to capacity in less than two minutes.

The dancing, I’m told, continued late into the evening, with people still shaking their heads as if to say, “Am I dreaming or was Diana Ross just singing to us?”

Overwhelming gratitude was expressed to the Five-Star Founders who supported this gala in the $100,000 and up category: John and Carol Curci, Janet Curci, and the John Curci Family Foundation, Alan and Helen Greene, John and Anne Marion, JoAnn McGrath, Greg and Stacey Renker, Bob and Karen Rishwain, and Mike and Mary Sue Shannon.

And to numerous 5 Star Fellows for their support at the $5,000 level. January 16th is a date that will be remembered and an evening that won’t soon be forgotten! For information on supporting Eisenhower Medical Center, contact the Foundation at 760-773-1888 or visit www.emc.org/giving.