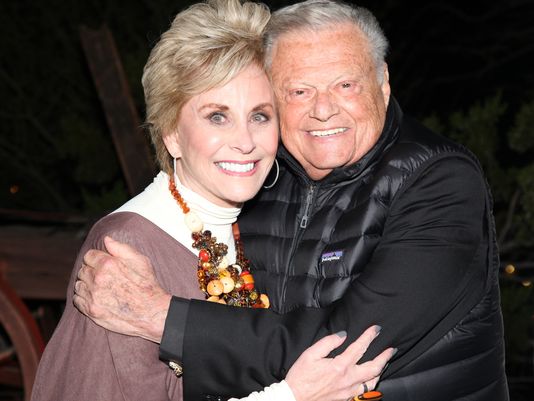 If you have not toured Cabot’s Pueblo Museum in Desert Hot Springs, you have not seen all of the desert’s truly unique attractions. It is like a huge, historic time machine, transporting visitors back, back in time to the old west – ancient artifacts, dirt paths, and all.

Last week, some 280 guests stepped into that historic time machine, to honor one of the desert’s best known philanthropist, Harold Matzner. I asked the museum’s board president John Mahoney how he convinced Matzner to be the Guest of Honor at this year’s fundraiser. His answer was fascinating.

“I asked three times in three years” Mahoney said. “Then I wrote him a letter, outlining how much he had in common with the man who built the homestead that is now the museum and is listed on the national registry of historic monuments.”

That man was Cabot Abram Yerxa.  (Yes, the museum bears his first name, not the last.)   Cabot was one of the most colorful characters and pioneers to settle in the Coachella Valley, arriving in 1913.  Even then, he was clearly a renaissance man – a flamboyant adventurer, entrepreneur, builder, world-traveler, and a defender of native Americans. He was also an artist, storyteller, and above all else, a philanthropist who was never known to say “no” to someone in need.

It worked.  Matzner recognized a comrade and agreed to be honored at a gala which drew about 280 guests.  Ticket prices ranged from $175 up to VIP tables as high as $5,000 each.

Among the top donors and underwriters were Matzner, Eddie and Danny Verdugo, Kevin Parker of David Webb (New York), Desert Valley Disposal, Walmart, The Desert Sun, Three Bunch Palms, FG Creative, and ChadGardner (the caterer with the crispest hors d’oeuvres of the season.)

The program included remarks by Mahoney, Barbara Keller, who presented to Matzner, and Senator Jeff Stone, and a spirited country-western performance by Jessie Payo of Los Angeles.  Keller, a close friend of Matzner who received the same award last year, kidded the audience about “not knowing that she was supposed to present the award to him until a few minutes before she took to the stage”, but her discussion of Harold’s philanthropy was clear and very well done.

Executive director Irene Rodriguez was busy with details but was being highly praised by everyone who knew her.

In accepting his final award of the season, Matzner said, ” Cabot’s is an underdog as far as Museums go.  But it is unique and historical and deserves to be both preserved and supported into the future.

Unfortunately, some wild-west winds made a surprise appearance during dinner, causing a few of us city slickers to long for the warmth of our cars. But everyone went home enriched by the knowledge that such a one-of-a-kind-in-the-world museum exists, and promising ourselves a return visit.

The museum is staffed by one of the most devoted teams of volunteers you will find anywhere and they urgently need help with repairs and expansion needs. The museum is open daily except Sunday, 9:00 AM to 4:00 PM. Admission is $13.