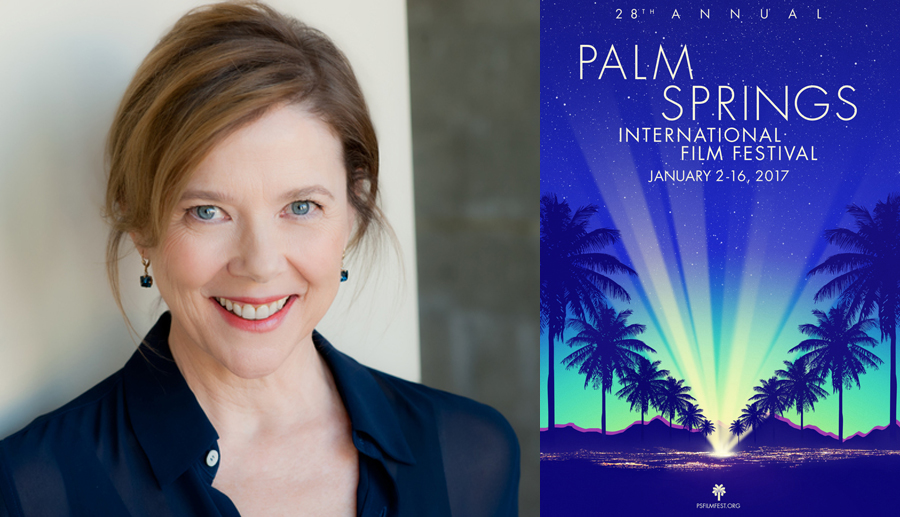 “Throughout her career Annette Bening has brought to the screen many memorable performances including the four films for which she was nominated for an Academy Award:  American Beauty, The Grifters, The Kids Are All Right, and Being Julia,” said Festival Chairman Harold Matzner. “Bening creates yet another memorable award-winning role portraying Dorothea, a free-spirited single mother raising her teenage son in Mike Mills’ upcoming film 20th Century Women. It is our great honor to present the Career Achievement Award to Annette Bening.”

Bening stars in 20th Century Women, from acclaimed filmmaker Mike Mills who delivers a richly multilayered, funny, heart-stirring celebration of the complexities of women, family, time and the connections we search for our whole lives. It is a film that keeps redefining itself as it goes along, shifting with its characters as they navigate the pivotal summer of 1979. Set in Santa Barbara, the film follows Dorothea Fields (Bening), a determined single mother in her mid-50s who is raising her adolescent son, Jamie (newcomer Lucas Jade Zumann) at a moment brimming with cultural change and rebellion. Dorothea enlists the help of two younger women in Jamie’s upbringing – via Abbie (Greta Gerwig), a free-spirited punk artist living as a boarder in the Fields’ home, and Julie (Elle Fanning), a savvy and provocative teenage neighbor.

Annette Bening is a four-time Academy Award® nominee, two-time Golden Globe winner, and two-time recipient of the Screen Actors Guild Award.  Her film credits include The Kids Are All Right, American Beauty, Being Julia, Danny Collins, The Search, The Face of Love, Girl Most Likely, Ginger & Rosa, Ruby Sparks, Mother and Child, The Women, Running with Scissors, Mrs. Harris, In Dreams, The Siege, The American President, Mars Attacks!, Richard III, Love Affair, Bugsy, Regarding Henry, The Grifters, Guilt By Suspicion, Valmont, Postcards From the Edge and The Great Outdoors.  She can currently be seen in the film Rules Don’t Apply and her upcoming films are The Seagull and Film Stars Don’t Die in Liverpool.

The Palm Springs International Film Festival (PSIFF) is one of the largest film festivals in North America, annually welcoming more than 135,000 attendees for its lineup of new and celebrated international features and documentaries. The Festival is also known for its annual Film Awards Gala, a glamorous, black-tie event attended by 2,500 guests, presented this year by Chopard and sponsored by Mercedes Benz and Entertainment Tonight.  The Film Awards Gala honors the year’s best achievements in cinema in front of and behind the camera.  The celebrated list of talents who have been honored in recent years includes Ben Affleck, Javier Bardem, Cate Blanchett, Sandra Bullock, Bradley Cooper, George Clooney, Daniel Day-Lewis, Leonardo DiCaprio, Clint Eastwood, Matthew McConaughey, Julianne Moore, Brad Pitt, Eddie Redmayne, Julia Roberts, David O. Russell, Meryl Streep, and Reese Witherspoon.  PSIFF is organized by The Palm Springs International Film Society, a 501(c)(3) charitable non-profit organization with a mission to cultivate and promote the art and science of film through education and cross-cultural awareness.