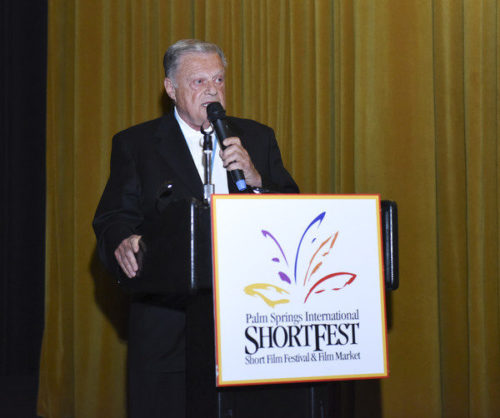 Welcome to our showcase of the filmmakers of the future.

You’re about to embark on a dazzling journey of discovery within the walls of the stylish, state-of-the-art Camelot Theatre. Over the next seven days, you’ll have the opportunity to view more than 300 remarkable films from over 50 countries, providing a clear understanding of why the Palm Springs International ShortFest and Short Film Marketplace was recently named one of the nation’s 10 best film festivals in the annual USA Today 10Best poll.

It was the only short film festival named in that prestigious top 10.

But ShortFest is more than just a great viewing opportunity for filmgoers. It’s basically a $500,000 educational initiative of the Palm Springs International Film Society, benefitting international filmmakers of tomorrow.

More than 600 student and emerging filmmakers come to ShortFest to network, attend panels, take master classes, have round-table discussions and make deals with agents, producers and programmers of other film festivals from around the world. These industry people do business in our unique marketplace, where they have the opportunity to scour the 3,000 shorts submitted to the festival in hopes of finding hidden gems.

The vast quantity of films on the big screen and in the Short Film Marketplace makes ShortFest the largest short film festival in North America. ShortFest also has been designated by the Academy of Motion Pictures Arts and Sciences (AMPAS) as an award-qualifying festival.  In the past 20 years, roughly 100 shorts featured at ShortFest have received Academy Award nominations.

It’s also accredited by the International Short Film Conference and designated by the British Academy of Film and Television Arts (BAFTA) and the British Independent Film Awards (BIFA) as an award-qualifying festival.

A huge thank you must be expressed to primary producers of this event, the Festival Director and Film Society Executive Director Darryl Macdonald, Managing Director Rhea A. Lewis-Woodson, Forums Producer Helen Du Toit, and Kathleen McInnis, last year’s Festival Director, who has been so important to the development of this Festival.

I also want to thank Rozene and Ric Supple, whose generosity, support and foresight have long benefited our festivals. Other invaluable, indispensable help comes from the Film Society’s Board of Directors, the hundreds of volunteers who make this festival function smoothly every year, plus the Palm Springs City Council, our many sponsors, and individual donors who help make ShortFest such a premier event.