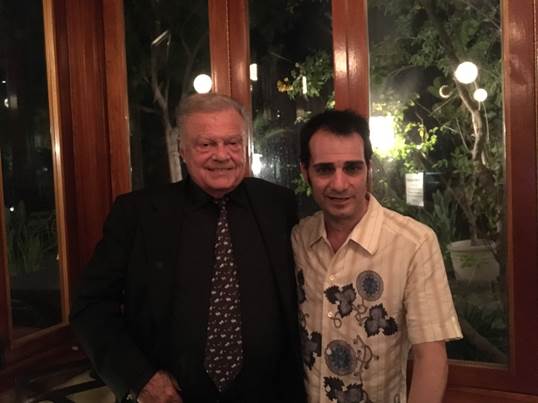 Not surprisingly, one of the smartest filmmakers to use ShortFest is a guy named Jason Matzner. Yes, he’s the nephew of the festival chairman, Harold Matzner. But Jason, who is Harold’s younger brother’s son from New Jersey, started as a child actor at 4, appearing in soap operas like “General Hospital” and appearing in TV shows like “Kojak.”

Jason, 46, got into filmmaking before Harold became involved with the film festival. He went to film school at Wesleyan University in Connecticut and got into the music scene after moving to L.A. 1992. He started making music videos, and eventually made some for the likes of Blink-182 and Save Ferris. That got him into shooting commercials and promos, and becoming a script analyst for Universal Studios. He made his first feature, “Dreamland,” in 2006 and it got into Sundance and won him a Best Director Award at Method Fest before it screened in Palm Springs in 2007. Jason has made three short films since then, but he really wants to make a film noir feature called “Sleep When You’re Dead.”

There’s a lot of choreographed action planned for that film and Jason had never directed action. So he met this martial artist and came up with an idea for an action short, titled, “The Job,” which had its world premiere Sunday at ShortFest.

“On one hand we made it to be a complete work of art that we’re very proud of and we want people to see,” Jason said. “It’s also as much made as a calling card, specifically as doing action.’’

Instead of making a short he could expand into a feature, if it got that steamroller going, Jason wanted to make a film where he could learn on the job
how to become an action director.

“I didn’t want to make a little sample for ‘Sleep When You’re Dead’ because I knew we would never have the resources,” Jason said. “We’d never have the actors we wanted because it would just be a little short, so you would end up poisoning the well of your own movie. ‘The Job’ is in a different tone — it has a different style of action, but it still shows off action, so it allows people to see what you can do without necessarily saying this is what the feature is about.
‘Sleep’ has a very different tone. It’s a dark serious revenge movie that takes place in and around the world of the Mexican narco cartel. So it’s heavy. ‘The Job’ is light.”

Jason said he had a good meeting at a Speed Pitch and now he’s going to L.A. for another screening and more meetings.

His manager is in charge of fundraising.

Uncle Harold is one of many investors in “The Job,” but “Sleep When You’re Dead” is no vanity project. Jason’s developing a career and he’s recruiting a team of help.

He brought much of his team to his Sunday Q&A, with Harold in the crowd. Jason is proud of what his uncle has accomplished and impressed by the film festivals he chairs.

“I always wanted something to bring here,” Jason said. “I come every year to both film festivals. They’re both festivals I really love. Palm Springs ShortFest is one of the premiere showcases for short films in the entire world.”