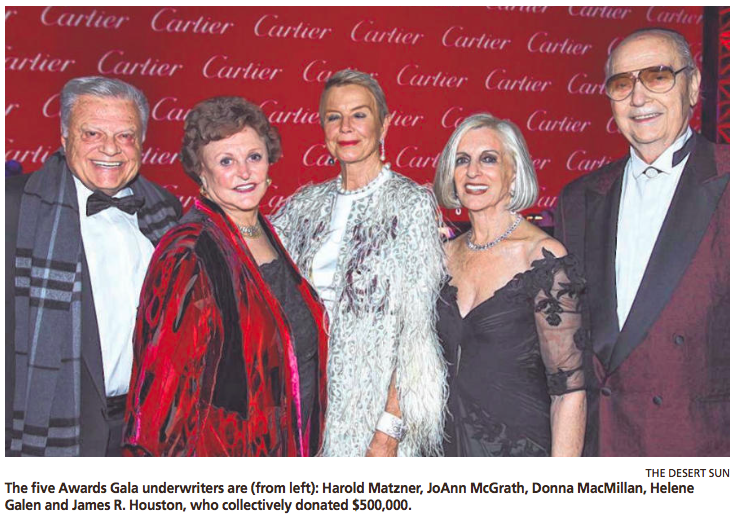 I must thank Robert Duvall, who provided the theme for this report on the Palm Springs International Film Festival Awards Gala.

When Terri Ketover, co-chair (with Garry Kief) of the after-party, introduced me as a “society reporter” Duvall quipped, “Good – let’s trade gossip!”

So here, in no particular order, are some of the stories, statistics, and gossip — overheard during our town’s most star-spangled night of the year.

Festival Chairman Harold Matzner opened the gala with the startling announcement that worldwide TV and newspaper coverage of this event was bringing the Palm Springs brand to more than 1 billion (with a capital “B”) viewers and readers throughout the world!

The gala, which sold out months in advance, drew more than 2,400 guests (all of whom were seated by awards gala Administration Manager Christina Sasse and Matzner’s executive assistant Cynthia Allyn) who dined on a sumptuous dinner of beef short ribs by Savoury’s caterers and owners Brad and Lynne Toles, and helped raise over $2.4 million to keep the festival and its educational programs growing.

Even the short ribs became part of the small talk, with friends of gala Chairman Jim Houston confirming that beef short ribs are his favorite meal and that, with the help of party planner Shari Kelley, Houston supervised every detail of the gala – from the 19,000 “Cartier crimson” fresh flowers to the unique, lighted, crystal apple gift at each place setting. Matzner paid tribute to founder Sonny Bono, honorary Chair Mary Bono, Palm Springs Mayor Steve Pougnet, and in memoriam, previous Agua Caliente Tribal Chair Richard M. Milanovich, who passed away in 2012.

The five Awards Gala underwriters were Helene Galen, James R. Houston, Donna MacMillan, Harold Matzner and JoAnn McGrath, who collectively donated $500,000, and are, not by coincidence, the five leading philanthropists in the Coachella Valley.

Matzner closed his opening remarks by thanking the festi-val’s year-round staff and 45-member board of directors, who collectively contribute over $1 million annually to the festival; and the smiling army of 950 volunteers who add immeasurably to the upbeat atmosphere of the film festival itself.

Brad Pitt turned his introduction of honoree David Oyelowo ( “Selma”) into a comedy routine, teaching the audience of 2,400 VIP’s how to pronounce “Oyelowo” by sounding it out repeatedly and eventually training them to sing it.

Oyelowo responded with, “You know you’ve broken in when Brad Pitt sings your name.”

Shirley MacLaine looked great and drew many laughs, thanking the festival for “recognizing that I’m still alive” and introducing writer/ director Richard Linklater ( “Boyhood”) by saying that when he directed her in a previous film, “He helped me find my inner bitch.”

Julianne Moore, thanking Steve Carell for her comic introduction, joked that, “I can’t believe he actually sang my name.”

One of the gala’s technical improvements this year was the unveiling of the desert’s first and only 150-foot video screen, which stretched the width of the Palm Springs Convention Center’s wall, prompting Hart to quip, “When I saw that screen, I thought, ‘My head’s going to be as big as Lincoln’s on Mt. Rushmore.’ ”

The screen proved its worth, however, giving every guest a front row seat to the action on stage.

Plus another 130 donors who gave $3,500 to $10,000 to this awesome undertaking which brings an estimated 1 billion electronic and print media impressions of national and international publicity to our city, its merchants and the valley’s No. 1 industry: tourism. These impressions are worth $40 million in advertising time and space. The gala takes place while Oscar ballots for nominations are still out. For that reason, the Awards Gala is considered the first important campaign stop on the Oscar trail.

With all of Hollywood’s concerns about being targets of cyber and other attacks, security was extra tight this year but beautifully handled by well-trained, polite and respectful plain-clothes guards … such as the one who appeared out of thin air to stop me from taking a photo of my granddaughter with Robert Downey Jr. As it turned out, this was not a matter of security, Downey just didn’t want to be photographed.

Honorees and presenters were presented with gifts from event sponsor Cartier, and celebrity guests arrived at the red carpet in all new Mercedes 2015 S550 sedans and GL450 SUVs.

The famous faces at this year’s after party were more accessible than last year. The youthful cast of “The Imitation Game” held jovial court on one side of the main reception room, posing for cell phone photos. What they probably didn’t know was that on the other side of the room, an even longer line had formed, consisting of guests who wanted their picture taken with festival Chairman Matzner.

Some of the hard working unsung stars of the evening were executive show producer Richard DeSantis, his producer Alise Mauritzson who ran the red carpet with Steve Wilson of BWR, assistant Jill Ostland, and director Bill Finlay and after party producer Tamara Bolton.