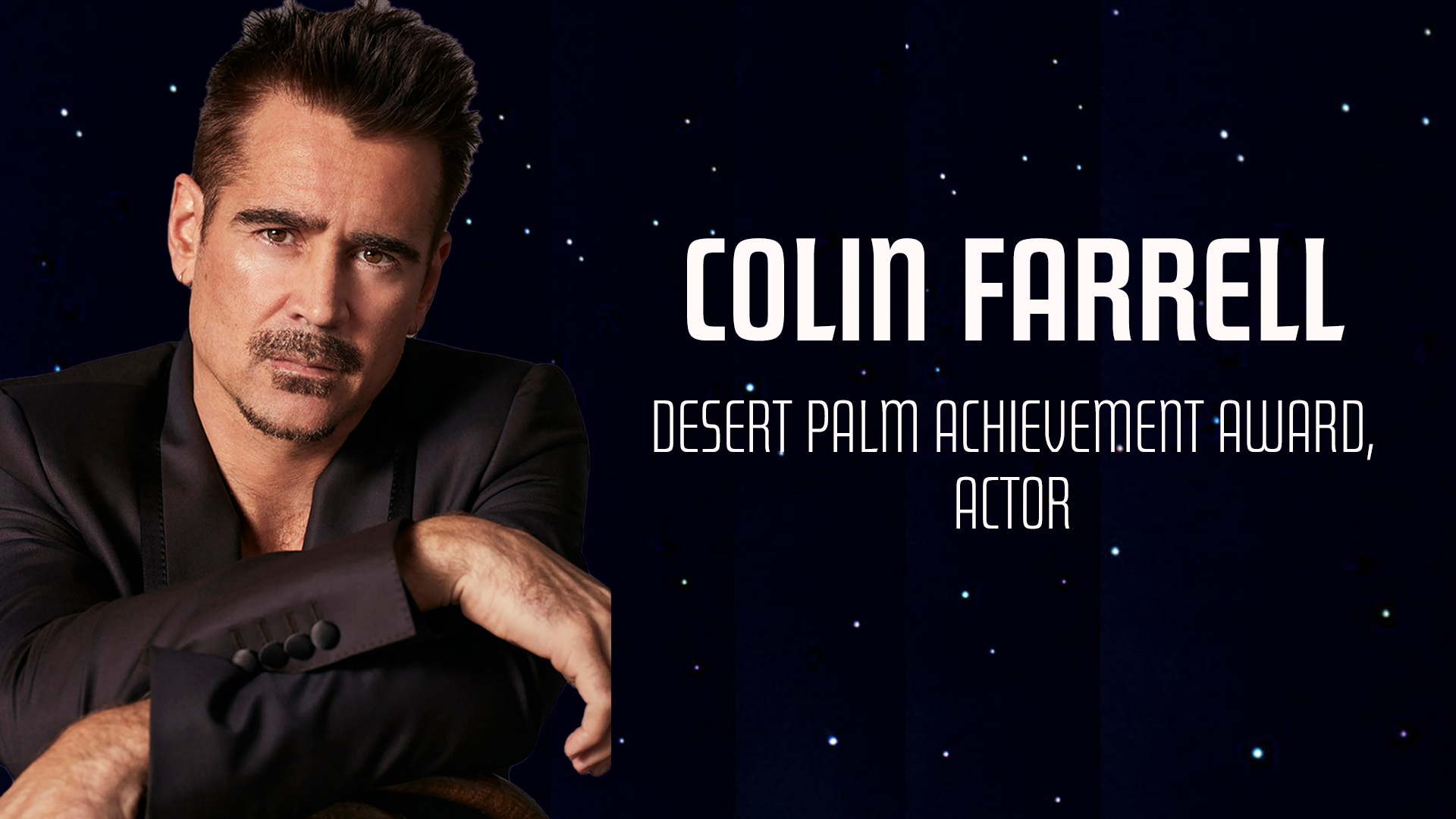 The Palm Springs International Film Awards has announced that Colin Farrell is the recipient of the Desert Palm Achievement Award, Actor for his performance in The Banshees of Inisherin. The Film Awards will take place in-person on January 5, 2023 at the Palm Springs Convention Center, with the festival running through January 16, 2023. The event will be presented by American Express and sponsored by Entertainment Tonight and IHG.

“Colin Farrell reunites with Brendan Gleeson and director Martin McDonagh in the masterful comedy The Banshees of Inisherin. Farrell gives a memorable performance as Pádraic a sweet-souled Irish farmer trying to save his lifelong friendship,” said Festival Chairman Harold Matzner. “For this career best performance, we are honored to present the Desert Palm Achievement Award, Actor to Colin Farrell.”

Set on a remote island off the west coast of Ireland, The Banshees of Inisherin follows lifelong friends Pádraic (Colin Farrell) and Colm (Brendan Gleeson), who find themselves at an impasse when Colm unexpectedly puts an end to their friendship. A stunned Pádraic, aided by his sister Siobhán (Kerry Condon) and troubled young islander Dominic (Barry Keoghan), endeavors to repair the relationship, refusing to take no for an answer. But Pádraic’s repeated efforts only strengthen his former friend’s resolve and when Colm delivers a desperate ultimatum, events swiftly escalate, with shocking consequences. Searchlight Pictures presents, in Association with Film4 and TSG Entertainment, a Blueprint Pictures Production, a Martin McDonagh film.

Colin Farrell has had a distinguished career of nearly twenty-plus years in film and television.  In 2009, he won a Golden Globe for his role in Martin McDonagh’s In Bruges. Farrell was also nominated for Best Performance by an Actor in a Motion Picture, Musical or Comedy at the Golden Globe Awards, Best Actor at the British Independent Film Awards, and Best European Actor at the European Film Awards for his role in the film The Lobster.

Past work also includes Dumbo, Widows, The Killing of the Sacred Deer, The Beguiled, Roman Israel, Esq., Fantastic Beasts and Where to Find Them, Miss Julie, Saving Mr. Banks, Winter’s Tale, Dead Man Down, Total Recall, The Way Back, London Boulevard, Fright Night, Horrible Bosses, Ondine, Pride and Glory, Miami Vice, Alexander, The New World, Ask the Dust, The Recruit, A Home at the End of the World, Phone Booth, Tigerland, Minority Report, Daredevil, American Outlaws, SWAT, and Intermission. His projects this year included The Batman for director Matt Reeves; Thirteen Lives for director Ron Howard; the drama The North Water; and After Yang which premiered at the 2021 Cannes Film Festival and also made its North American debut at the 2022 Sundance Film Festival.

The Palm Springs International Film Society is a 501(c)(3) charitable non-profit organization whose mission is to cultivate and promote the art and science of film through education and cross-cultural awareness. The Film Society produces the Palm Springs International Film Festival (PSIFF) and Film Awards every January and Palm Springs ShortFest in June. In addition to curating the best in international cinema, PSIFF’s Film Awards has come to be known as the first stop on the campaign trail for the Academy Awards® and our Oscar®-qualifying ShortFest is the largest short film festival and market in North America. Our festivals, year-round member screenings and educational programs manifest our organization’s mission by nurturing and encouraging new filmmaking talent, honoring the great masters of world cinema, and expanding audience horizons.