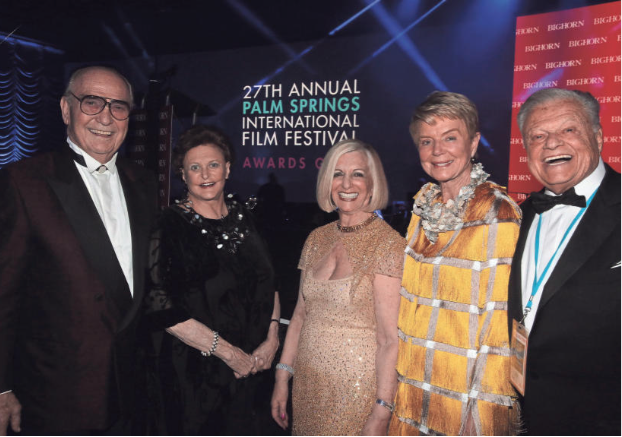 For more than a decade of Januaries, I’ve been saying to friends and family, “Don’t try to reach me next week, I’ll be on Planet Film Fest.” This year, the PSIFF orbit exploded from a planet into an international universe, as it became larger, more influential, and more international than ever. The numbers tell the story:

» Sellouts at many hotels and strongly increased sales at restaurants and other local businesses.

» Thousands and thousands of national and international electronic and print media mentions, an estimated 2.5 billion impressions of the Palm Springs brand, worldwide, in dozens of languages . . . value in the millions of dollars.

» A huge number of onlooker fans, some of whom began lining up almost 24 hours before the red carpet was rolled out, and the arriving stars, especially Johnny Depp, Bryan Cranston, and Saoirse Ronan were exceptionally generous, posing for selfies with fans and signing hundreds of autographs.

» One final note: The staggering success of the gala was funded by the generosity of its underwriters, five local philanthropists: film festival board members Donna MacMillan, Helene Galen, and JoAnn McGrath, along with gala chair Jim Houston, and PSIFF chairman of the board Harold Matzner.

Their combined underwriting of over $500,000 funded all Gala costs, and enabled the gala to use a large portion of the $2,400,000 raised to support the festival’s screenings and its educational and outreach programs.

The gala’s presenting sponsor was BIGHORN, represented by its chairman and managing partner, RD Hubbard, with probably 100 BIGHORN members in attendance.

The two other major gala sponsors were Entertainment Tonight and Mercedes-Benz, with Mercedes-Benz as the official vehicle of the festival.

The festival’s title sponsor is the City of Palm Springs and the presenting sponsors are the Agua Caliente Band of Cahuilla Indians, The Desert Sun, Spencer’s Restaurant, and Entertainment Tonight.

Other key participants included event planner Shari Kelley, who assisted gala chair Jim Houston every step of the way, including his choice of the 27,000 orchid blooms decorating the tables and a crystal Buddha souvenir for each guest. Houston also chose the menu – beef short ribs by Savoury’s caterers, who produced over 3,000 meals for the gala evening.

Although there were no threats or specific concerns, security was tight. Very tight. Every person entering the Convention Center – even the fans huddled outside – had to pass through a metal detector. In his opening remarks chairman Matzner said, “We have a very large and effective security presence here tonight both outside and inside the Convention Center. This security is designed to be both highly preventative and very responsive to any incident.”

He went on to say, “As we sit here tonight the Convention Center is encircled by a significant number of armored SWAT Team vehicles and a solid shield of police and Sheriff’s deputies positioned at every single door of the building’s entire perimeter. Then he added sadly, “This is not what we should have to do here in America, but it is the right thing to do at this time.”

“HONEY ARE YOU READY FOR THIS?”

Hostess Mary Hart opened her part of the program by quoting an anonymous A-List Hollywood couple she overheard as they were preparing to hit the red carpet that night. The A-List “he” said to his A-List “she”, “Honey are you ready for this?” referring not only to our own PSIFF gala but the kick-off of the entire, competitive Hollywood awards season which ends with the career-making Academy Awards.

Several veiled references to the Oscars were made in the star’s introductions and acceptance speeches, the most obvious coming from Saoirse Ronan’s introduction of Cate Blanchett when she said of Cate, “An Oscar nod on January 14 would surprise no one.”

Another presence felt throughout the evening was that of the legendary producer Jerry Weintraub, who died July 6 of a heart attack at age 77. Matt Damon, in his award acceptance speech, thanked Matzner for including in the program a moving tribute video from producer Steven Soderbergh about Weintraub, saying, “He was one of the best people I’ve ever known and he loved this place so much, I miss him every day.”

I didn’t attend the lavish After Party, which started at 9:15 PM at the Parker Palm Springs, but two of our guest reporters, Madeline Zuckerman and Judy Vossler, reported it as “light and airy, feeling like a real Hollywood party with great music,” crowded with Hollywood and local guests. BIGHORN’s Judy