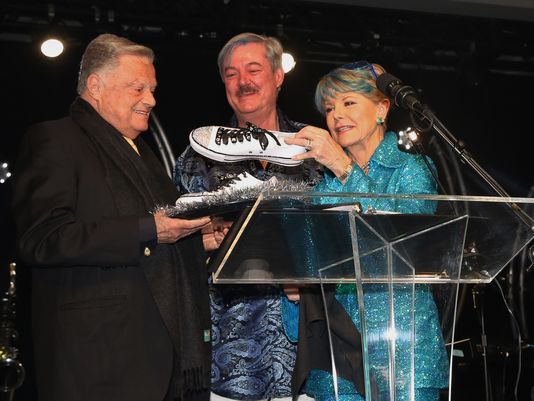 It was disco night at the Crystal Ballroom at the Renaissance Indian Wells Resort.   Sunday Night Fever was the theme and the room rocked with the disco music of the 70s with many of the 325 guests costumed in bellbottoms, glittery jump-suits, platform shoes and white go-go boots of the period.

The atmosphere was festive, but ACT for MS founder Gloria Greer was clearly missed. Gone from the scene was ACT for MS’s tireless cheerleader who had just passed away from cancer.  Glaringly absent was her contagious smile, enthusiasm, and larger-than-life personality.

As soon as everyone was seated, a video rolled on the screens.  It showed clips from prior fundraisers of Gloria up on stage welcoming the audience like she did every year.  A hush fell over the crowd.  Immediately smiles erupted from table to table as her voice boomed out over the room as if she were really there and all was well.

Co-Chairs Nancy Stone and Marc Byrd did a fantastic job adding creative visual and performance features to this event.  The highlight of the evening was when Nancy and Marc took the stage to introduce the evening’s distinguished honoree Harold Matzner. Byrd, who donated the centerpieces along with Al Jones, casually exchanged comedic witticisms with Stone turning the hilarious skit into a mini Harold Matzner roast.

Nancy began the exchange with “did you know that Harold once brought a chimpanzee on roller skates into the famous Friars Club in NYC for his friend David Cornstein’s 50th birthday”?  The last quip from Byrd before bringing Matzner up to the stage was, “…and you forgot to mention, Nancy, that Harold once brought an elephant up to a hotel suite that he had decorated like African jungle, complete with 1,000 pounds of peanuts, to surprise a friend when he returned from the theater.”  Not missing a beat, Matzner, who has generously contributed more than $50 million dollars to area non-profits since 1995, took his place at the podium and retorted, “But, most important, it was a baby elephant!”

The Co-chairs presented Matzner with a pair of brightly decorated disco tennis shoes.  Matzner is known for wearing only white tennis shoes.  He is in his 9th year as the Chairman of the Board of the McCallum Theatre, his 11th year as Chairman of the Palm Springs International Film Festival, and is the long-time Executive Vice Chairman of the Palm Springs Art Museum.  He serves on the Board of Trustees of the Eisenhower Medical Center and Barbara Sinatra Children’s Center.  He also chairs several charity fundraising events each year.

Harold Matzner gave a touching tribute to Gloria Greer.  He said, “there will never be a replacement for someone like Gloria, who, almost single handedly blended a cocktail of social prominence, charities, fundraising and media into a philanthropy industry.”

He also added, “…No matter what challenges Gloria faced in life, she was always upbeat, always smiling.  I loved that little laugh of hers.  We worked on a video once for her television program.  She made the whole experience fun.  She had spontaneity, a quick wit and charm…”

It was heartwarming to see Gloria’s twin daughters, Norma and Ann, following in their mother’s footsteps as ACT for MS ambassadors.  Also on hand to oversee the festivities was vice president of ACT for MS, Margo Nelligan, and board member Richard DeSantis, who also produced the evening.  The popular Suz Hunt, ACT for MS President, was home recovering from a broken hip.

Cannon blasts of confetti and streamers got the audience up from their seats and out on the dance floor ready to disco to Steve Negrete’s talented band, the Latin Crooners, and singer Lola Rossi.  This was an outstanding band that helped to make the evening a huge success.