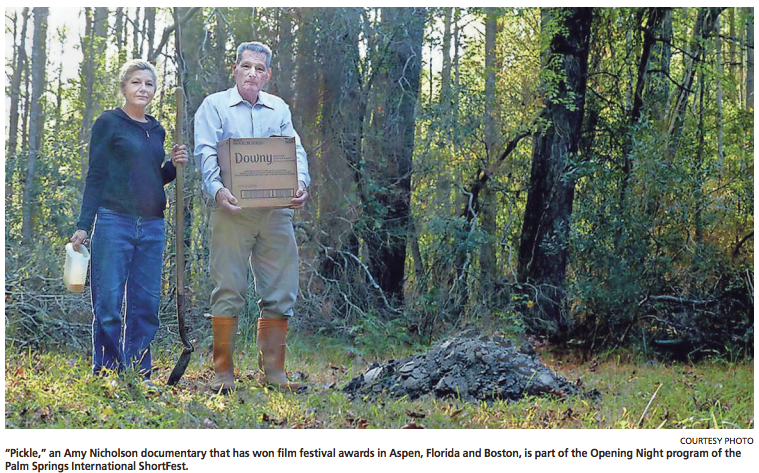 The nation’s biggest little film festival kicks off Tuesday with organizers wondering how it got so big.

The 22nd annual Palm Springs International Short Film Festival and Film Market will screen 328 films from 54 countries, which is about the same as last year. But the festival received 30 percent more submissions than in 2015 and each film is placed in the film market, even if it doesn’t get a public screening. So industry film buyers and programmers from other film festivals may view more than 4,100 short films on monitors in the market space in the Renaissance Palm Springs Hotel.

Festival board chairman Harold Matzner says ShortFest isn’t measured by any numbers other than how many filmmakers will attend to derive benefits from it. He calls ShortFest, “basically a $500,000 educational initiative of the Palm Springs International Film Society.” Some 500 writers, directors, actors and producers from around the world are expected to attend the seven-day event, with some being hosted by festival supporters and others being housed in hotels, based on need, Matzner said.

Word is apparently getting out that many feature filmmakers have emerged from ShortFest. Recent Oscar-winning actress Brie Larson announced at the January film festival awards gala that she made her film festival debut at ShortFest co-writing and co-directing a film called “The Arm.” Directors Jason Reitman of “Juno” and Rod Lurie of “Straw Dogs,” and Oscar nominees including Jean-Marc Vallee, Ben Zeitlin, Robin Swicord, Daniel Barber and Carlos Cuaron also have screened films at ShortFest.

“Filmmakers are jonesing for some sense of community,” du Toit said. “They want to feel plugged into something bigger or wider and if you give them a platform to meet people from all over the world, it’s really exciting. The exchange of ideas happens on a completely different level and it does because the whole way filmmaking is approached in different countries around the world differentiates dramatically. If you’re American and you go to a festival where it’s 90 percent American filmmakers, you’re not breaking through to new territory or seeing the world differently the way people do in countries where there might be war zones.”

“I think the festival also has developed the reputation for being such a great place to network because it’s kind of a level platform,” added Bartlett. “We only show short films and we show many of them. At some other film festivals, it can be a little bit difficult (for short filmmakers) to meet people because the feature film program is distinct from the documentaries, which are distinct from the shorts. But at ours, everything is together. The nightly events are geared to everybody meeting everybody. There’s no kind of hierarchy, so people find it very open and eclectic.”

The festival will feature forums, round table discussions and pitch sessions Thursday through Saturday at the Renaissance that target filmmakers looking to transition to feature films or specialize in short film. That’s the component Matzner expects will attract filmmakers. “But also it’s looking at that whole mashup between the combination of platforms,” du Toit said, “what you can do with Twitter, ways you can use social media to promote your films, ways in which you can create new content in social media and make a bigger impact in your film. The world is changing and evolving rapidly and we’re trying to reflect all of those things. So, for the filmmakers who come here, on top of building an international community with all these other filmmakers and thinking about cinema differently, they’re thinking about ways they can promote their own films and find money for their own films by crowdsourcing.”

ShortFest also is going after new audiences this year.

The typical ShortFest crowd is a mix of young filmmakers and their friends and local retirees who have time to attend movies starting at 10:30 a.m. But du Toit says ShortFest is hoping to bring more millennials to ShortFest screenings. The age of the average programmer is late 20s and early 30s. The average filmmaker is about the same age. And du Toit says Bartlett, a programmer for Shortoftheweek.com, has shown a connection to the millennial audience.

“God knows we are trying,” du Toit said. “It’s a matter of really pro-actively going after them and we’re trying to do that. We’ve really, really increased our social media. We’ve brought somebody on who’s doing some really great work for us, so we hope that’s going to help.”

“I think some of the films we’re bringing in this year will have an appeal to younger audiences,” Bartlett said. “We’re going to have some VR installation work for the first time. We’ll have speakers from companies like Vimeo and other social media-based companies that have a wide outreach to that community.”

But older festival-goers remain the foundation of the short film-going audience.

This year’s audience will find more films by women than ever before.

“We really made a concerted effort this year to try to address some of those imbalances that we see sometimes in festival lineups and in the industry in general and include more diversity, Bartlett said. “I think the balance can always be better. I would like it to be 50 percent films directed by women. That’s the goal.”

The Opening Night program, starting at 6:30 p.m. at the Camelot Theatres, features three films directed by men and three directed by women. And, in keeping with that goal of attaining a 50-50 balance, the directors appearing with their films will be Ella Smith, director of “Mdudu Boy,” and Jim Cummings, director of “Thunder Road.” They are expected to walk down a red carpet as early as 6 p.m. and attend the Opening Night Party to follow at Lulu California Bistro.

SHORTFEST INFO
What: The Palm Springs International ShortFest and Film Market, presented by the Palm Springs International Film Society
Where: Most screenings are at the Camelot Theatre, 2300 E. Baristo Road, Palm Springs. Demonstrations and forums will be held at the Renaissance Palm Springs Hotel, 888 E. Tahquitz Canyon Way.
When: The festival runs from 6:30 Tuesday, for the Opening Night program, through 8 p.m. Monday, June 27
Tickets: $13 per screening, forum and master class; $50 for the Opening Night program and party; $40 for the Closing Night program and party; $25 for filmmaker parties; $200 for the Insider’s Pass, including opening and closing night programs, film programs and forums; $100 for the Student Pass, excluding the opening and closing night programs and all parties; $500 for the Chairman’s all-access pass; $69 for the 6-pack of films (limited availability)
Information: psfilmfest.org or (760) 778-8979