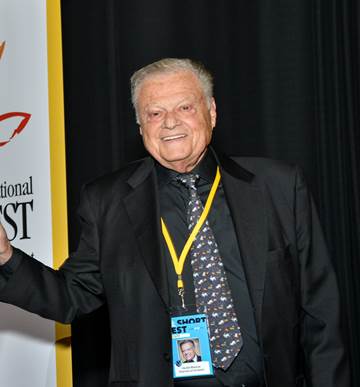 On behalf of my Board of Directors, I want to welcome you to the Palm Springs International Festival of Short Films, also known as ShortFest.

This is really quite a fantastic event (and I don’t usually say that about events that don’t make a dime)!  ShortFest is a $500,000 educational initiative of the Palm Springs International Film Society.  It’s an investment in a talented collection of young artists looking to make their marks in the world of cinema.  We are proud to mentor, to nurture, and to provide opportunities for these filmmakers of tomorrow.

Five-hundred filmmakers, writers, directors, producers, actors, and industry members from all over the world are coming to ShortFest this week.

ShortFest is the biggest short film festival in North America.  More than 4,100 films were submitted, and they are all available for viewing in our film market.

But ShortFest also is the best short film festival in North America. Now this isn’t just an exaggeration . . . (I’ve been accused of exaggerating in the past) . . . but these emerging filmmakers are getting things they won’t get anywhere else.

Every filmmaker should go to our parties every night to network with hundreds of their peers.

Bruce Fessier, of The Desert Sun, wrote a story in today’s newspaper naming a litany of filmmakers who have gone on to make it in feature films after starting at ShortFest.  Brie Larson, who just won the Academy Award for Best Actress for her role in “Room”, said at our January Awards Gala that she wrote and directed a short that was launched at ShortFest.  Other directors Bruce Fessier cited as having had short films at Palm Springs ShortFest include:  Jean-Marc Vallee of “Dallas Buyers Club”; Aaron Schneider of “Get Low”; and Jason Reitman of “Juno” (who likes to come to Palm Springs to write his scripts).   Bruce even forgot to mention an important director, Ava DuVernay, who premiered her film at ShortFest and then came back to launch our 2015 January feature festival with her great film “Selma.”

So, get ready to feel the excitement, the energy, and the creative vitality these young artists are about to bring to Palm Springs, courtesy of ShortFest.

I want to thank my dear friends, Rozene and Ric Supple.  They built the Camelot Theatres for ShortFest and our January feature festival.  We will always be in their debt for this wonderful screening venue.  They are wonderful people.

And now, I would like to introduce you to our ShortFest Director, who has been part of our film festival family in various capacities since the beginning – Helen du Toit.